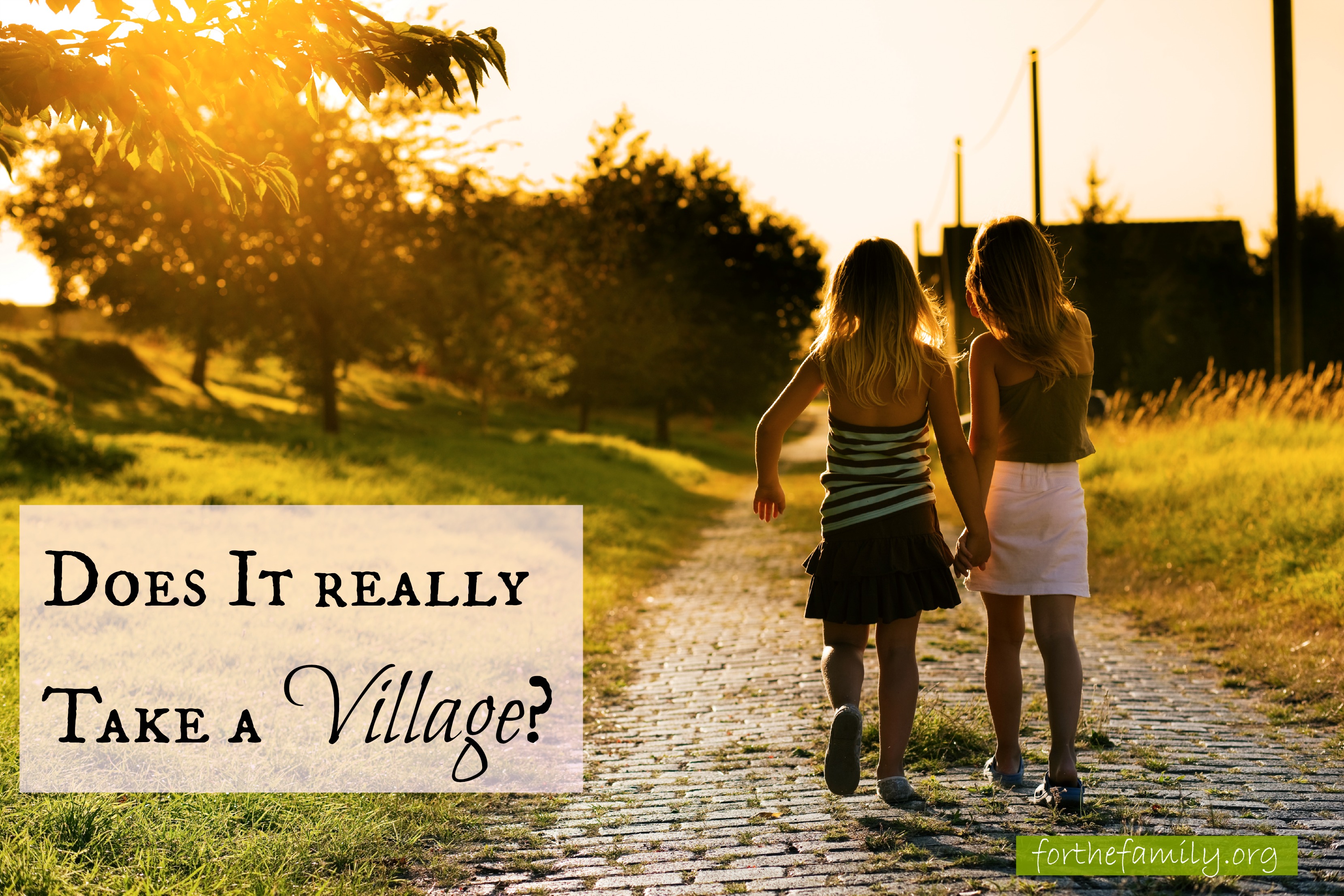 It was back when I was galivanting around with my big 1980’s hair in college that I first I heard the old African proverb:

“It takes a village to raise a child.”

My global concerns professor at my Christian college, who was from Jamaica, told of the way adults in his homeland all  chipped in to teach the children of the neighborhood right and wrong. You needn’t worry if the kiddos were down the street playing and misbehaved. They would be corrected by an adult who had the same views on parenting as you did.

Later on, when I was having babies all through the decade that was the 1990’s, first lady Hilary Clinton came out with a book by that title that attempted to expound upon the idea.

Many people I know were up in arms about this concept, asserting that this ancient proverb had now taken on a new twist and what was really being said was, “It takes a big government to raise a child so let us show you how it is done. Oh and by the way, we’re gonna raise your taxes to do it.”

If that was what was meant, then I don’t like the statement either.

However, it has always equally rubbed me the wrong way when parents have asserted, “I can single-handily raise these kids providing everything they need to turn out right. I will be their only role model; their only spiritual influence and their only teacher of anything biblical, practical or even academic. Kids need their parents and no one else, thank you very much.”

Both of these extremes make me a bit uneasy.

I don’t want the government raising my kids.

But I’m not interested in a totally solo act either.

So, does it take a village to raise a child?

Ever since my firstborn was small, I have prayed for women who would connect with her, inspire her, help draw out her God-given passions and model for her what it means to follow Christ.

I was a homeschool mom. Her greatest female influence. But by the time she was 12, she had latched on to a few wonderful women with whom she spent much time. She babysat their kids or helped them clean house or taught sign language or English to their homeschooled children. In the meantime, she was also watching these women parent their kids, relate to their husbands and serve their God.

Often times later on when Kenz was struggling with an issue as a teen, she’d pick up the phone or ask to use the car and head out to spend a little time with one of these women.

You know, it never bothered me.

While I heard other moms lament about the fact that their daughters weren’t “coming to them” or “opening up” when they felt they might be struggling, I instead would ask God to show me my place. Often my place was on my knees before Him, but quiet before her. As a friend once told me, “Don’t always talk to your kids about God. Sometimes you gotta just talk to God about your kids.”

So He & I would chat. And many times He’d tell me the same thing; to shut my mouth, make Kenna her favorite dessert and leave her a little note telling her I loved her.

No lip-flappin’ needed about the current issue at hand.

Looking back now on my almost 23 year-old’s life, I see the way God orchestrated the placement of people in her path who have helped mold and shape her, inspiring her to be more like Jesus. Yes, she had a mom. But she also had an Ellen, a Julie, a Lysa and a Wendy. They all played such a big part in my baby girl’s life.

While I do still feel that as a parent we are our kids’ most important teacher and role model, we are not their only one.

And no….it doesn’t take a village to raise a child.

It takes a parent, guided by God and a little help from whomever He sends your child’s way.

And willing to trust Him to draw their hearts to His, even if in the drawing, a little detour is needed along the way.

Remember, more is caught than is taught.

And just telling children what is right and wrong, along with all the appropriate biblical back-up available, doesn’t always work. Sometimes they have to learn lessons the old-fashioned and painful hard way.

Or perhaps at least learn them from someone other than you.

Is it time for you to call in some back up?

« 3 Keys To Raising Contented Children
Which One Was the Cute Little…Liar? »