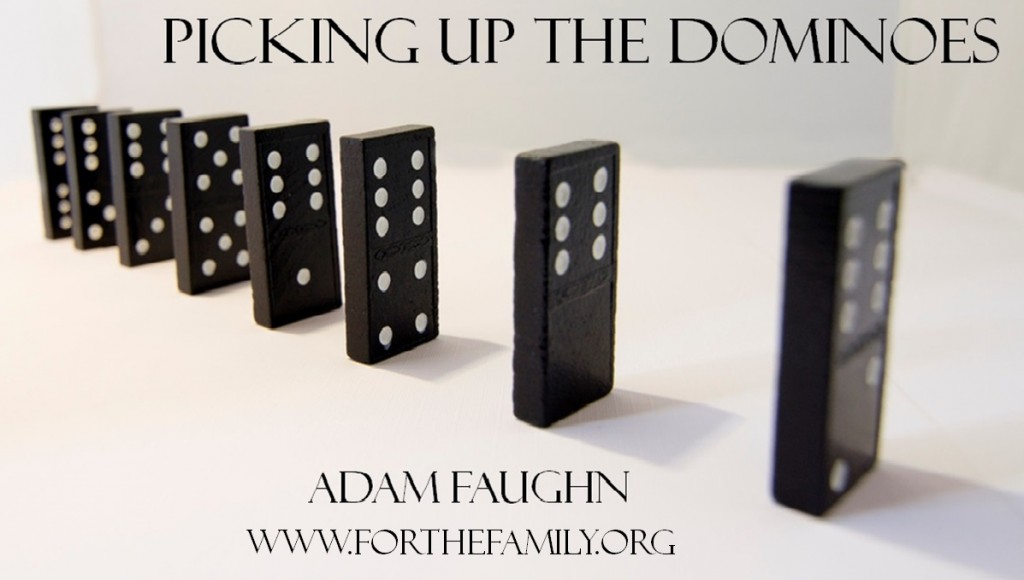 When I was a boy, I loved to set up lines and lines of dominoes. It would take hours to set up just a few hundred, and then about a minute to watch them all fall. Still, I loved it. Now, my son loves it, too. We sit together for a long time trying all sorts of tricks, knowing that the whole line probably will not fall… but that’s okay. We enjoy seeing what we can make the tiles do.

Recently, we were engrossed in a long project and had decided we were nearly done. That’s when it happened: his finger hit one of the dominoes and started knocking down a part of the line he had worked on for a long time. It was a blessing in disguise that he hadn’t set them up perfectly because only a few fell, but it was still hard on him. It had taken a long time to set them up, and now they were all toppled over.

His cheeks got red and his lip quivered. I knew what was coming. He ran out of the room and up to his as the tears started to flow. Now I know I’m not the perfect parent, but this one time I may have gotten it right. I went up to his room, hugged him, and told him we could work on it again. I told him we weren’t done yet, anyway, so he could make that part of the line even better than it was before.

Because I wanted him to learn that we all get second chances.

After composing himself, my six-year-old boy came back down and set up a really cool line of dominoes. He didn’t try anything quite as ambitious or intricate as his first line, but it was still great. After several minutes, he had set up probably two or three dozen dominoes in a curvy line that he—and I—was very proud of.

Several minutes later, we were done with all our work. He called his mom and sister into the room for the big “show.” He hit the first domino, and sure enough, he had done it perfectly this time. All the dominoes that he had set up fell!

Ironically, one part I had set up didn’t work! But my son just reached over, put his toe on it, and helped it along, so that all the dominoes would fall over.

I don’t know if he fully got the message, but maybe he did. We not only get second chances, we give them.

If that message sticks, he’ll make a great difference to a lot of people in this world, because this world is filled with people and families who are in desperate need of a second chance. After all, that’s what Jesus came to do, and we are to show Him to this world.

Jesus certainly gave me a second chance, and I want my children to learn what that means.

For one afternoon, maybe my son started to get that message. 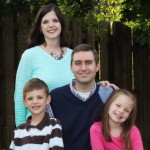 Adam Faughn preaches for the Lebanon Road Church of Christ in Nashville, TN. He is married to Leah, and they are blessed with two children: Mary Carol and Turner. He maintains a blog, www.faughnfamily.com, and writes books for Christians of all ages, which can be found at www.faughnfamily.com/store. He is a graduate of Freed-Hardeman University and enjoys college basketball, reading, writing, and spending time with his family. His goal in life is to see as many families go to heaven as possible.