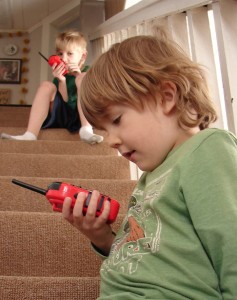 My wife picked out our freshly-five-year-old son’s birthday present, a pair of walkie-talkies. He was thrilled.

“Oh, Mommy! It’s just E-zackly what I wanted. Thank you!”

We were pleased, proud, and happy. What amazing parents we were. What gift selection. What a joyful home we had made. Everything, as the poets have said, was awesome.

That is, until the kids started playing with them.

Arguments. Anger. Crying. Fighting. No one could wait to listen. The older kids sort of got the hang of it quicker, but everyone wanted to talk and kept forgetting to hold down the button. And when they did remember, it was usually after they were done talking, or right when the other party was also talking. It was chaos.

We were suddenly rethinking our status as Earth’s Greatest Living Parents. Why the chaos? Why the confusion? Why couldn’t the kids figure this out?

They probably would have figured out something over time, if they didn’t punch each other’s lights out and give up first. But the good news was they didn’t have to.

I stepped in and shared some basic information I had learned from my grandfather when I used to sit with him while he used his Ham Radio.

“It’s best if you start by saying who you are, then, ‘Have you got your ears on?’ You also always want to end with ‘over,’ then let go of the button, so the person on the other end knows you’re done and they can hold their button down and start talking.”

“Then,” I went on, “when the second person starts, they say ‘roger that,’ so both people know that what was said was heard and understood.”

You can imagine the conversation from there. They immediately began following these conventions and, as a result, began having a blast.

We learned some things about walkie-talkies.

It was a good lesson for them, and for me. 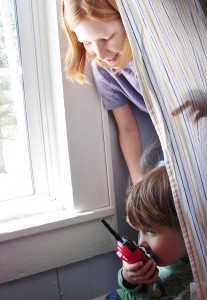 Tradition may be defined as an extension of the franchise. Tradition means giving votes to the most obscure of all classes, our ancestors. It is the democracy of the dead. Tradition refuses to submit to the small and arrogant oligarchy of those who merely happen to be walking about. –G.K. Chesterton, Orthodoxy

You and I are raising our children in an era of toxic thinking about what liberty really is. Almost all children are catechized into what is really a religious devotion to personal expression as a supreme end along with rejection of what were once believed to be healthy boundaries. They will be constantly lied to in thousands of ways. Storytellers will lie to them. (This is a good reason to follow C.S. Lewis’ wise advice about reading books out of your own era. Consider some now-out-of-print books for the kids.)

In a world so often hostile to Truth, we must be devoted to Reality as God has revealed it. And we should, I think, look for the thousands of parables available to us, the endless stories in the world which reveal that reality of God’s order. We can find them if we have eyes to see, or ears to hear, even in unlikely places.

« Stop, Look and Listen: The Teachings of a Tenacious Toddler
It Starts with Me »