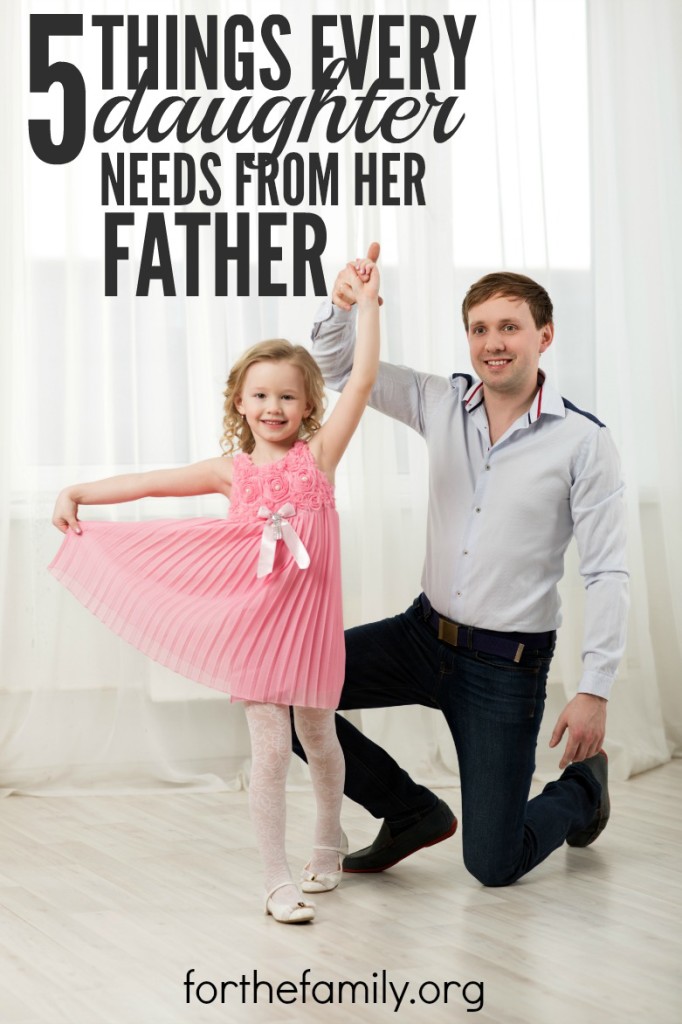 A father’s relationship with his daughter is not important just because people say it is. There are volumes of studies and statistics supporting the critical role a father plays in the psychological, social, and developmental role of his daughter.

For example, the North American Journal of Psychology states that a father’s engagement with his daughter directly correlates with his “daughter’s self-esteem and life satisfaction.” Additionally, a father has “greater impact on (his) daughter’s ability to trust, enjoy and relate well to the males in her life” according to a Wake Forest University study.

As a father of two girls, I often feel the weight of the role I play in my daughters’ lives. I am ever conscious of how my words and my actions are impacting the development of my girls into young women.

But what specifically do daughters need from their relationships with their dads?

Here are 5 basic things every daughter needs from her father:

1. Be Encouraging
As dads, we sometimes have a tendency to push our kids too hard. On more than one occasion, the Bible specifically warns fathers to not provoke their children so that they do not become angry or discouraged. (Col. 3:21, Eph. 6:4) Being an encouraging voice in our daughters’ lives does not make them weak, it makes them strong.

2. Be Affectionate
Our daughters crave our affection. If they don’t get it from us, they will seek it elsewhere. Affection can be in our words, in our touch, and in our actions. The important thing is letting them know they are loved. Researcher Paul Raeburn concluded that “girls who grow up with an engaged, involved father have a reduced risk of early puberty, risky sexual behavior, and teen pregnancy.”

3. Be Present
Dads are busy balancing work, marriage and parenting (moms are too!). Most men struggle with finding their significance in what they do as opposed to who they are. As dads, we can sometimes short change the ones we love by being with them, but not really being present. When we have the opportunity to spend time with our daughters, we need to give them our full attention. They need to see and feel that nothing else matters to us other than what’s happening in that moment with them.

4. Be Honest
Most of us don’t set out to lie to our children. However, there are times we justify not telling the whole truth under the premise that we are protecting our kids. However, many times “protecting our kids” is really more about “protecting ourselves.” No parent wants to look foolish in front of their children. As our daughters grow older (and I would suggest at a much younger age than we would suspect), they will pick up on our self-preservation techniques, and we will lose their trust and faith. Perhaps the best thing we could do is show our daughters that a man, a strong man, is capable of admitting his faults and confessing his shortcomings. If we want our daughters to marry a man of honesty and integrity, we must demonstrate the same to them.

5. Be Adventurous
From a very early age, my daughters have learned that if you want to hang out with dad, you have to be ready for an adventure. My oldest daughter is tentative and cautious by nature, but we have climbed mountainsides and swam with sharks. Dads can bring out the “wild side” in their daughters. That’s why little girls like to wrestle with their daddies and bookworms, like my daughter, will get in the water with sharks. Bringing out this trait in our daughters gives them confidence, boldness, and self-assurance that they can do whatever they set their mind to do.

Fathers: It is both a great privilege and a tremendous responsibility to raise daughters. Being aware of our important role and taking the time to actively engage in their lives will pay big dividends down the road. Let’s maximize our impact on the lives of our daughters.

P.S. Dads, if you’re looking for ideas on how you can interact more with your daughter, our new family devotional may be just the thing!

« When You’re Tempted to Raise Your Voice
Teaching Our Children: You Are God’s Glorious Beauty »