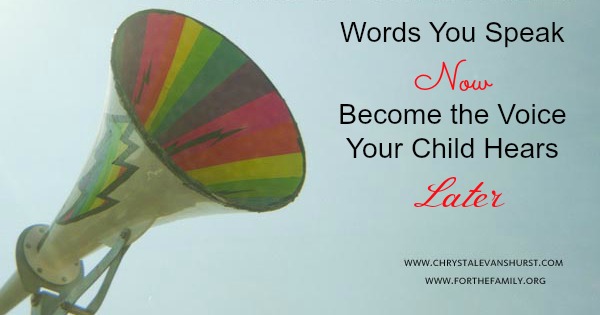 I listened as my oldest son recounted to a friend what he intends to be when he grows up:

I think I want to be a Lego engineer.

I smiled from across the room.  He totally could do that. He went on.

I think I want to invent stuff too.  I’m good at putting things together.

I wondered at his steady confidence at such a young age as he pondered what he could do and how well he thought he could do it.

And then it dawned on me.

Those were things I had said to him.

On the many days where he sat quietly playing with his Legos, I have walked by him, put my hand on his shoulder and encouraged him in his pursuits.

He heard me when I praised him.

And he remembered every word.

Recently I complimented a friend of mine by telling her how good I thought her writing was.

She had a hard time accepting the compliment.

She proceeded to tell me all of the reasons why she wasn’t a good writer. After listening to her a bit, I stopped her in her tracks and reiterated that she was a good writer and told her to just accept the praise instead of trying to disprove it.

My friend apologized and explained that it was difficult for her to accept a compliment because she felt incapable of doing really good work. Because she had grown up hearing that she was stupid.

In a flippant way, and mainly during times of frustration, her mother would say,

My friend heard every word.

And she still hears that voice in her head as a forty-something year old woman.

We need to understand that the words we say to our children now become the recording they will play in their heads for much of their lives later. We as parents have the power to either cripple their self-image or strengthen it by what we tell them. And while many of us would never intentionally damage our children with overt negativity, some of us unknowingly communicate our thoughts indirectly.  For example, listen for the pessimism in these exchanges:

The converse is also true. Listen for the optimism exuding from these statements:

I am proposing, however, that we should weigh our words carefully and be aware that much of what we say sticks.

What we say matters.

Know that what you say to your child today may be the very voice that they hear over and over as they live out the rest of their lives.

Do your part to make sure the voice they hear delivers the message you want to live in their hearts.

Death and life are in the power of the tongue, and those who love it will eat its fruits (Proverbs 18:21 ESV).

« The Friends We Keep: He Says
When We Want Our Kids to Listen to Instruction {Parenting through Proverbs: Proverbs 19:20} »