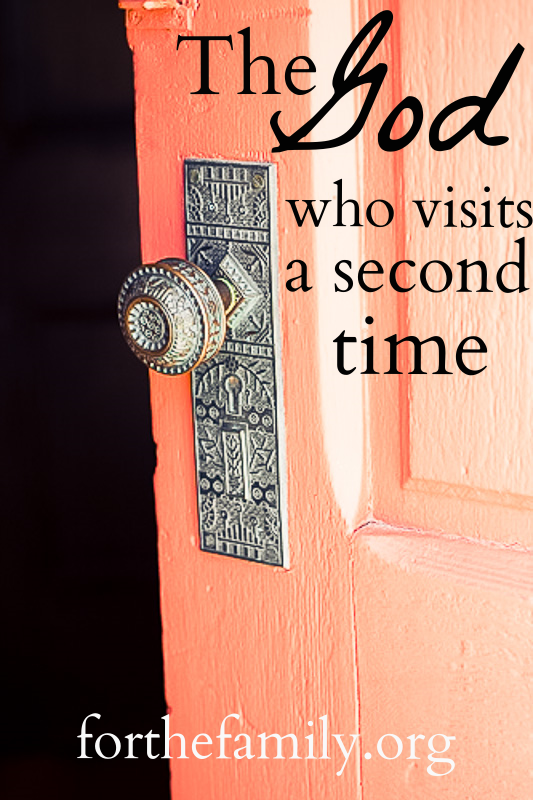 Do you feel like you have blown it as a parent?

Maybe not completely,maybe not even today, but we’ve all been there. Too harsh, to quick to dole out punishment, too frustrated to really see, to overwhelmed to engage. The guilt can eat away at us and leave us wondering if we are truly up for this whole parenting thing. Do you want to know the coolest part about raising children in the light of grace?

God’s plan will not be derailed when we blow it.

God is working in you and through you in his plan for your children. He has chosen you to be their mom and dad. He sees your inadequacy right along side all your gifts and He is still for you. Still with you. Still using you. He wants to make himself known in your weakness.

I can say this with confidence because it is the way God works again and again in the Bible. The people God choses are very seldom the people we would choose. They are typically arrogant or lack faith and are almost always insecure. They have all blown it and made huge mistakes.

For a long time, my least favorite person in the Bible was Jonah. He could not pull it together. I think reading about him and judging him made me feel better about myself (true story). Do you remember the story? Jonah opposed the will of God, ran away to avoid speaking to the people of Nineveh, because he didn’t think they were worthy of God’s mercy. These people were a brute force in Jonah’s time and he had likely seen destruction in their wake. He did not want to see them experience God’s favor. . . the favor that he clung to, the favor he thought came from all the ways he was living his life the right way.

You can probably already see why I don’t like him. I see just a little too much of myself in this guy. Poor Jonah. It took being swallowed up in the belly of a fish for three days before he obeyed. Yet, even after seeing with his own eyes the people he despised come to repentance, after seeing God’s will complete, Jonah’s heart didn’t soften. He went to whine about it all under a tree. That’s the end of the story. He never got over himself.

Moses on the other hand has always seemed so heroic to me. But if we take a closer look, the truth comes out that he was pretty brash and arrogant, at least at first. The book of Acts tells us that he had a passion for God’s call on his life, to identify with his people, to be the one to free them from their oppression. He thought he would be welcomed as their rescuer by asserting himself. Nope. Moses jumped the gun.

“When Moses was forty years old, he decided to visit his own people, the Israelites.  He saw one of them being mistreated by an Egyptian, so he went to his defense and avenged him by killing the Egyptian. Moses thought that his own people would realize that God was using him to rescue them, but they did not.” -Acts 7: 23-25

So he ran. He hid in the desert for forty years.

I’ve hidden too.  I’ve buried my head and held guilt and grief over all the things I’m not doing right.

But we serve a God who visits a second time.

He came again to Jonah. After three dark days that must have felt like death, our God came again. He wrought mercy on a nation that was wretched because of who He is.

He came again still, only this time, God Himself anguished for three days of death.

He brings mercy to us.

He came again to Moses. He said, I AM. I am the author of it all. I am transcendent. I am holding all things together. I am enough. He rescued a people.

Then he came and was I AM in the flesh. He was enough.

The greater Jonah emerging after three days of death has come. The greater Moses, delivering us from bondage, is with us. And He is the One leading your family and holding it all together.

He not only comes again to use us, now he dwells with us. In us.

He is the God who visits a second time and a third and a fourth. . . . his plan will not be derailed by us, by what we think we have lost or have left behind, or failed in, because his plan is really not about us at all; Its about Him.

Wherever you are today, wherever you have been, there is mercy and rescue for your family in Christ.

May you seek and find both in him today,