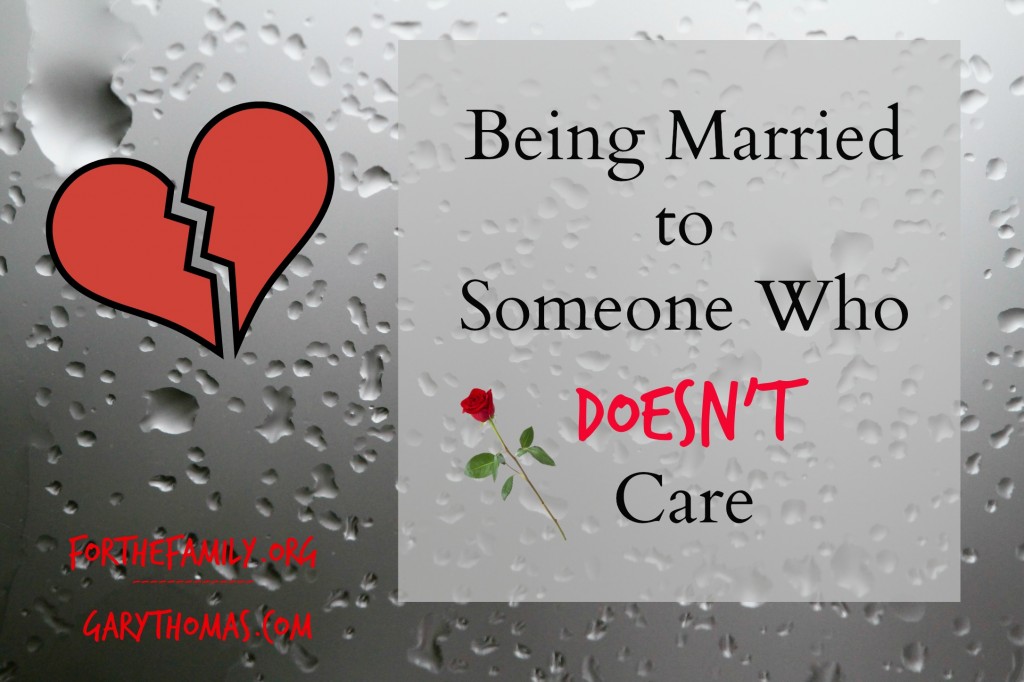 Jason and Maria have been together for 15 years, and it has taken Jason that long to realize that he and his wife’s vision of a successful marriage are worlds apart.

What do you do when you finally realize the marriage you want to work for is a marriage your spouse doesn’t want or won’t work for?

Though it’s often the wife who seems more relational, in this case Jason is the one who desires more soulful discussions and a commitment to work on the relationship. Maria says she wants that, too, but the only talk she initiates is about surface things: decorating the house, what the kids need done, or something her mother told her. She never asks Jason how he’s doing, what he’s feeling, or how he thinks the relationship is going—even though he has repeatedly expressed his desire that she do that.

It doesn’t take a Ph.D. in therapy to know that Jason desires a certain level of intimacy that Maria doesn’t.  Maria is willing to live on the surface.  As long as she and Jason do “fun” things (according to Maria’s definition) and take care of the house and family, she’s happy in her marriage.  The fact that Jason isn’t happy with that doesn’t seem to bother her—at least, not enough to make her do anything about it.

One of the challenges in such a situation is that “fixing” a relationship isn’t like fixing a car.  A relationship between two individuals requires cooperation.  Ideally, Jason’s desire to go deeper would be enough to motivate her.  Those are legitimate desires that most wives would welcome.  But apparently Jason’s pain isn’t Maria’s pain; it’s not enough motivation for Maria to change.

What I admire about Jason is that, while recognizing all this, he is still engaged in the marriage.  He realizes that God doesn’t call us to love and be faithful only to unselfish spouses.  In fact, Jesus specifically says that He excels in loving the “ungrateful and wicked” (Luke 6:32-35) and tells us to love just as He loves (v. 36).  Later in that same passage, Jesus adds, “Give and it will be given to you,” but He doesn’t say the person doing the giving will be your spouse.

If we love out of reverence for God, we will receive God’s comfort.  Giving to get is the world’s view of love, but it’s not Christ’s.

Those are my theoretical words, but here is Jason’s real-life response in answer to my question:

What do you do when you realize that your spouse isn’t going to meet legitimate needs?

1. Get the needs met secondarily, through appropriate channels.

For Jason, this means building rich relationships with others, though not with women on their own.  It’s not ideal, but it helps.  Jason has some solid friendships with guys, and he and Maria have some solid couple relationships.  Though Jason wouldn’t meet any of the wives on their own, he finds that sometimes he can initiate couple-related conversations with another couple that Maria might engage in. He has to be the one who is intentional about this, as Maria won’t seek it on her own.

2. Remember someone has it worse.

Jason has a friend whose wife left him after 12 years of marriage.  This guy, according to Jason, is “as solid as they come.”  Even so, because of the separation and subsequent divorce, it has been two years since he has had sex.  “I can’t say I’m happy with where Maria and I are at sexually,” Jason admits.  “At most, we have sex once a week or so.  But I can’t even imagine going two years, so I try to be thankful for what I have rather than focus too much on what I don’t.” By remaining bitter, Jason would risk taking a frustrating marriage and making it even worse. Sadly, that’s what many disappointed spouses often do.

3. Choose to dwell on the positive, however limited and imperfect it may be.

In one sense, if your spouse is emotionally stunted, you must do what the spouse of a physically disabled spouse must do. While you might really enjoy walks along the beach, if your spouse is in a wheelchair or recovering from a stroke, that might not happen. But instead of being resentful, you do your best to create opportunities that you can enjoy.

This may sound frustrating and even depressing to some of you who were hoping I’d give you three keys to “fix” your marriage, but here’s reality: never letting go of your frustration with something that is never going to change is a recipe for bitterness and estrangement, not a happy life.

You can make your marriage even worse than it already is, or you can seek to enjoy what aspects of it that you can. Philippians 4:8 is, I believe, a brilliant invitation to making the most of what you have.