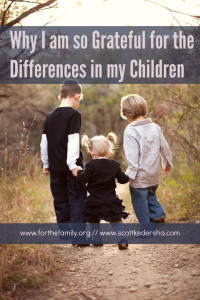 One of the most painful and helpful lessons I continue to learn in parenting is how difficult it is to parent more than one child. No, I’m not talking about the amount of time children need (and deserve) and I’m not referring to the transition from man-to-man defense to zone defense when you go from two kids to three. Parenting is difficult whether you have one child or 20 of them.

What I am referring to is how tough it can be to parent children who are so different from one another.

Parenting and life would be so much easier if they all reacted the same way, received discipline the same way, and responded to the same tone of voice. We’d have it made in the shade.

The challenge became very apparent to me and Kristen when the Lord gave us twin boys. What amazes me is how different two children can be who were conceived at the exact same moment, entered into the world one minute apart and have the same body parts. One is sporty, the other one is musical. One loves reading, the other one would be OK if he never looked at a book again! One loves people, the other one recharges by spending time on his own. Their differences drive me crazy.

While parenting might be easier if they all responded the same way and needed the exact same forms of discipline, how boring would that be?

As followers of Christ, we believe children are a gift from the Lord (Psalm 127:3 – Behold, children are a heritage from the LORD, the fruit of the womb a reward.) We also know they are made in God’s image (Genesis 1:27 – So God created man in his own image, in the image of God he created him; male and female he created them).

1 Peter 3:7 says, “Likewise, husbands, live with your wives in an understanding way…. so that your prayers may not be hindered.” The principle for this verse is that the husband is to live with his wife in a way that shows that he understands her. If he doesn’t, his prayers will somehow be blocked. This truth has spurred me on to love my wife in a way that shows I understand her. I study her, I spend time with her and I pursue her in ways that show I care.

While Peter is not speaking about parenting in this passage, the message translates to parents: live with your children in an understanding way. Put their needs before your own. Seek to understand how they are wired in unique and different ways. Study them and spend time with them.

I’m trying to learn how to not just tolerate or accept the differences in my four boys, but rather appreciate, embrace and celebrate their differences. When I work to understand their differences, it allows me to connect with each of my children in a different, unique way.

My wife does this better than any parent I know. She takes on hobbies like shooting hoops in order to spend time with our boys. I love learning and watching my wife appreciate, embrace and celebrate the differences in our boys.

How about you? Do their differences drive you crazy? The obvious answer is, at times, yes. The better answer: Yes, but I am so grateful for the differences the Lord built in to each of my children. Their differences stretch me, entertain me and keep me dependent on the Lord. And that is exactly what every parent needs.

Scott Kedersha is the Director of Singles at Watermark Community Church in Dallas, Texas. For almost a decade, Scott has helped lead Merge, Watermark’s premarital ministry, which is geared towards preparing seriously dating and engaged couples for marriage. He’s been married to Kristen since 2001, has four boys and blogs on marriage and family, ministry and premarried relationships at Scottkedersha.com. He is most passionate about the local church, college football (Go Wake!), marriage and family, community and reading. You can find Scott on his blog, Twitter, Facebook, or Instagram.

« Hope for the Hero in Your Spouse
Family and Home: Our Most Important Resources »