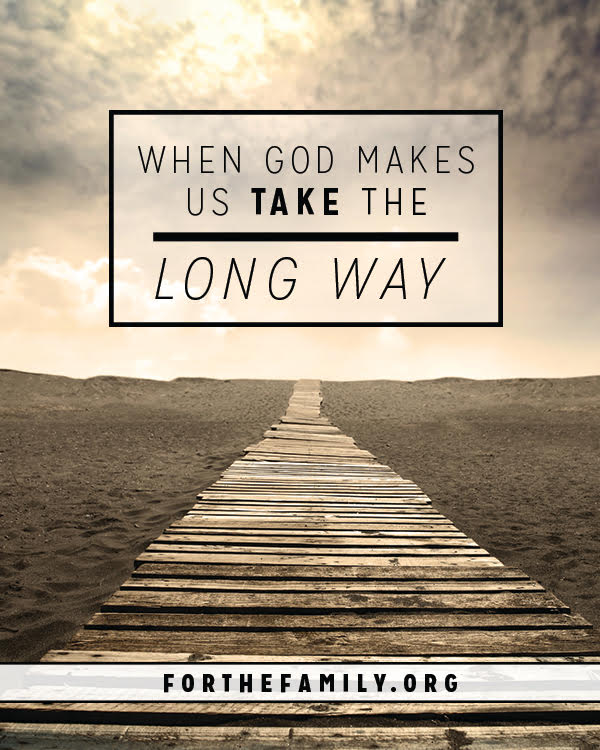 Maybe it’s the hurry-up, can’t-we-do-this-faster, surely-there’s-a-short-cut Southern California girl in me, but when I look at a map showing the Israelites’ route from Egypt to the Promised Land, I’m like, really? Why go south all the way to the far end of the Sinai Peninsula, when they could have simply headed east for a nice, straight shot. A much easier, quicker, shorter, more convenient way. Done.

As believers, sometimes a good place to start is remembering what we don’t believe. We do not believe that our gracious God would send His children on a wild goose chase, or that He would lead them astray just for fun. Neither do we believe that our God is capable of making mistakes. So, looking at the facts, that God had the Israelites’ best interest at heart and that He loved them as a father loves his own child, why would He choose this more time-consuming, more difficult route? Why the long way around?

The long way protected the Israelites from unknown battles. The Jewish people had no idea what they would face, no clue what they would find around the next corner, mountain or acacia tree. Seeing what lay ahead, and how His children would have responded, God wisely led the Israelites south, away from war zones and down a more peaceful path. In reality, their puzzling path was merely the protective hand of a loving Father. When Pharaoh let the people go, God did not lead them on the road through the Philistine country, though that was shorter. For God said, “If they face war, they might change their minds and return to Egypt.” (Exodus 13:17, NIV)
The long way showcased God’s miracles. If the Israelites were never hungry in the wilderness, there wouldn’t have been a miraculous food created from the morning dew. If they had plenty to drink on their journey, no one would have witnessed water gushing from a rock. If they hadn’t felt a little loss, the fire to lead by night and the daytime cloud signaling to stay wouldn’t have been necessary. God had too much strength and power to display in the desert, and too much faith to grow in the hearts of His people, to let them take the quicker road. As in the days when you came out of Egypt, I will show you my wonders. (Micah 7:15, NIV)

The long way was an opportunity for teaching. Unchartered territory has a funny way of getting our attention. When the Israelites realized that their journey was going to be a long and difficult road, first they grumbled, then they listened. There were consequences for their bouts of doubts, but their complete dependence on the Lord eventually gave them a sensitive ear to His voice. He spoke to His children on a regular basis, instructing them about His character, His holiness, His sovereignty, and His trustworthiness. “The secret things belong to the Lord, but the things revealed belong to us and our children forever.” (Deuteronomy 29:29, NIV)

Thousands of years after God’s chosen nation entered the Promised Land, we see what God wanted to accomplish through the longer way. And it’s clear that He loved His children too much to let them miss it. So today, what is your Promised Land? What is that dream or goal or place or season or job or situation you’d like to find yourself? Maybe it’s finding a soulmate. Or becoming a wife. Possibly getting pregnant or growing your family through adoption. Or a particular vocation or industry in which to work, a part of the world to live, a talent or hobby you want God to use, a ministry to start.

You’ve been walking a while now and you’re anxious to arrive, but God is making you take the long way around.  Instead of the quick, comfortable, easy road, He has set you on the seemingly out-of-the-way way. Maybe it’s months, years, or even decades to get you where you’re going, to show you what couldn’t be discovered by taking the short cut.

And He loves you too much to let you miss it.