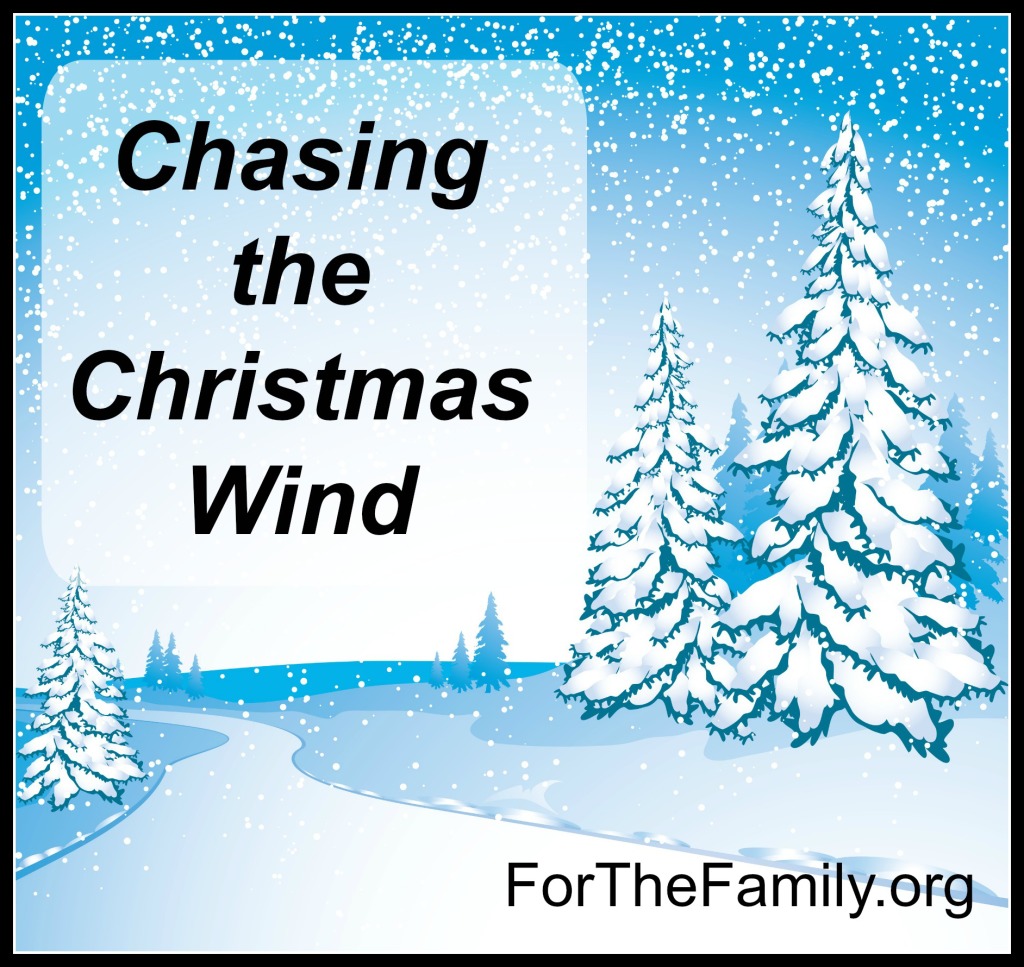 Have you ever tried to chase the wind?

The whole idea is absurd, I know, and so posing the question is a little whacky. Because really, who can chase the wind and catch it? (Answer: no one.)

And yet… when I anticipate Christmas celebrations with extended family, I am sometimes guilty of chasing after the wind.

Because here’s what I envision: hand-holding around the feast-laden table with heads bowed in genuine thanks to the Father; story-telling and reminiscing over rich dessert; thoughtful gifts exchanged in the soft twinkling of Christmas-tree lights; deep talks around the fireplace with giggling children playing happily at our feet as we all sip hot cocoa; board games and laughter while munching leftovers from dinner; hugs and wishes of good-will as we reluctantly say good-bye.

It’s a beautiful picture, yes? But it’s a “chasing after the wind.” Because here’s the problem…

My picture excludes the sister-in-law whose boyfriend drinks a little too much, who doesn’t feel comfortable around the brother who is a pastor, who chooses to leave before the party even gets started.

My vision doesn’t figure in the chronically ill niece who spent 80 days in a children’s hospital fighting for her life, who very much wants to be together with family, but who will likely spend yet another holiday celebrating with doctors and nurses.

My fantasy rules out the grief-ridden parents whose son drove a jeep headlong into a tree 20 years ago, whose Christmas commemorations are forever bittersweet, whose calendar-keeping involves the phrases “before Mikey died” and “after Mikey died.”

The reality is this: families are messy, and this is a reality made ever more clear during the holidays — when we all decide to gather together in one place to share life for a bit. It has taken me about three decades to realize that overlaying a Hallmark Christmas scene loaded with unrealistic expectations upon our family get-togethers is merely a “chasing after the wind.”

Fond of the phrase “chasing after the wind,” King Solomon used it no less than eight times when penning the short book of Ecclesiastes. His reason? To drive home the point that life not centered on God and His purposes is meaningless because without God, nothing else can satisfy.

Not even the Hallmark-ish, Norman Rockwall-y family of my daydreams.

So I have stopped chasing after the Christmas wind. I’m learning instead to love better. With God’s ever-present help, I am learning how to be more kind and more loving to those in my family who make poor decisions, who hurt my feelings, who choose to ignore me altogether. Because “if a person isn’t loving and kind, it shows that he doesn’t know God—for God is love” (1 John 4:8 TLB).

But I do know God. He is the One who loves me even while I make poor decisions, hurt His feelings and ignore Him altogether. And because God Really Always Can Endure* with me (G.R.A.C.E.!!), He expects me to really always (at least try) to endure with others, too.

So this Christmas, the only chasing in which I will engage is this: a chasing after the God who loves deeper and wider and higher and longer than I could ever grasp (Ephesians 3:18) so that overflowing with His love, I can also lavish it upon everyone who crosses my path.

Hopefully, our extended family is divinely empowered to do the same with me.

Learning better how to chase after God,

* From TheAnimaSeries, a video entitled “What Is Grace?”

« Teaching Children the Joy of Giving
Where May We Lay Our Young? »