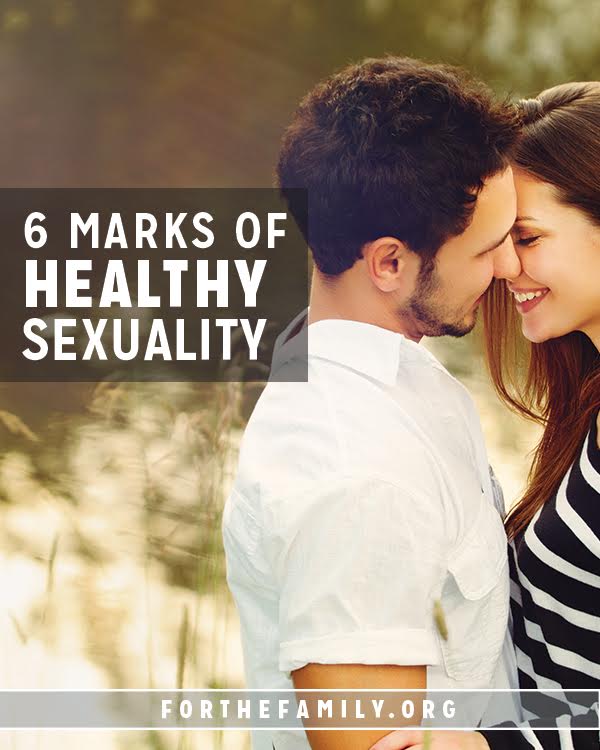 My wife will tell you there’s a big difference between “not sick” and “healthy.” Her frustration with some doctors today is that they settle for “not sick” or treat the symptoms of sickness, rather than pursue organic health.

But what are the marks of a healthy sexual relationship?

It’s not inappropriate to ask what is most pleasurable or most exciting for married couples, but meaningful lovemaking is so much more than creating greater sexual arousal and climaxes. That’s why it’s not a bad idea to also ask “What are the markers of a wholesome sexual experience that is accomplishing God’s relational intent?”

Seeking a healthy sexual relationship is a fair and good and wise and holy pursuit.

These six marks aren’t exhaustive; I’m sure there are many more, but here’s a short, non-scientific test to see how you and your spouse are doing in regards to sexual intimacy. We’ll share the first three markers this month, and the next three markers next month.

In a biblical view of sex, physical intimacy draws husband and wife ever closer together. After the intimacy is over they smile, hold on to a very pleasant shared memory, and their bond is deepened accordingly. I’ve just completed a book (out in January 2017) called Cherish: The One Word That Changes Everything for Your Marriage and I’ve found that cherishing your spouse is the most intimate form of healthy sexuality there is. It’s what we should strive for in sexual relations. When a spouse is being cherished in the bedroom, he or she won’t feel used; they’ll feel affirmed. He or she won’t feel they are being taken advantage of; they’ll feel celebrated, appreciated, cherished.

Healthy sex says to each (willing) participant: “You matter. You are desired. I am not having sex with a body but making love to you as my special 3-dimensional (body, mind mixed with emotions, and spirit) spouse. I affirm you and want to please you.”

Be wary of any form of sexual excitement or fulfillment that is separate from appropriate relational connection. If it’s not drawing husband and wife closer together, it’s not healthy.

Healthy sex serves a relationship; unhealthy sex becomes the relationship, which is asking too much of sex. Sex should be an expression of what is, not a way to momentarily and artificially create what you hope to be true. Our culture tries to make sex the pathway to intimacy, rather than healthy sexuality flowing out of an expression of intimate connection.

By nature, sex can last only so long and be performed only so often, and sexual chemistry waxes and wanes. Sexual desire simply cannot sustain a lifelong marriage. But an intimate sacred marriage can sustain a tremendous lifelong sex life.

My friend Dr. Mitch Whitman points out that the absence of healthy sexuality sometimes increases the aggrieved spouse’s focus on sex almost to an obsession, so that it becomes practically the only thing that matters to the frustrated spouse. If one spouse says, “The rest of our relationship is so strong you shouldn’t need sex,” that’s tantamount to the other spouse saying, “Our sex life is so good you shouldn’t need anything besides sex.” In other words, we can fall off the rails on either side of the equation: asking sex to do too much, or not taking advantage of its power at all.

This discussion may offend some people, but I pray it’s a therapeutic hurt that gently confronts and leads to healing rather than further shame. I don’t want to shame anyone. I write as a Christian who respects God’s creational intent and accepts the Bible as the best expression of that intent. If you disagree with the Bible or my understanding of what I believe the Bible clearly teaches, you’ll disagree with these conclusions.

Beware of coercive marital sex. Some men and a few women will use their spouse to serve a sexual addiction—let’s watch pornography together. Let’s swap partners. Sometimes, men will use sex with their wives to deaden their own pain—anesthetizing themselves—and thus put inordinate physical demands on their spouses. Men who insist on daily sex (I’m not talking about the honeymoon phase here) may be using their wives to fight back an addiction or an intimacy problem rather than cherishing and affirming their wives by giving her pleasure.

In our culture today, the most common silly notion (not even questioned by many) is that all desire must be legitimate, equally respected, tolerated, and even indulged. That’s foolish, ruinous, and not true in any other life experience. It’s possible to desire something that is harmful. You can eat yourself sick, you can spend your way to bankruptcy, and you can “sex” your way to disaster. So no, you are not obligated as a spouse to indulge every one of your spouse’s desires.

As one example: specialists who I respect have told me that in their work with men who demand anal sex against their spouse’s wishes, there are usually two reasons: they are trying to re-live sexual exploitation from when they were young (but now they have the power by demanding it, instead of being the victim hurt by it) or they are acting out a desire that was cultivated through pornography. Neither is helpful; neither should be indulged. I’d be at least suspicious about ever wanting something that the medical community generally says is not healthy for a woman’s body. Healthy sex is mutually affirming in all aspects: spiritually, emotionally, and physically.

Dr. Douglas Rosenau stresses that a poor body image, sexual shame, repression of healthy sexuality, and sexual immaturity are also aspects of sexual brokenness. In other words, not wanting to do something that is holy can be every bit as much evidence of brokenness as does wanting to do something that is wrong. And it’s wrong to expect your spouse to indulge your brokenness by forever swearing off sexual activity.

Sex outside of God’s lines is like a snowball. If sexual coercion, obsession or immaturity is allowed to “roll” it only gets bigger, not more manageable. By giving in to your spouse’s unhealthy urges, you’re not “managing” anything; you’re creating a snowball that may bury you, your marriage, and your family. The sooner we stop the snowball from rolling, the better chance we have to attain sexual health. Allowing your husband to wear your undergarments or indulging some other fetish so that he’s not shamed by it is sort of like holding a needle while he injects himself with heroin. He’s no longer doing it alone, but he’s still doing it and it’s still harmful and the longer he does it, the more harm it does.

One of the most common ways for women to let marriage perpetuate sexual brokenness is by being non-sexual. Instead of challenging deep-seated feelings that sex is “nasty,” she expects her husband to develop and share her aversion to sex rather than develop a mutually satisfying sexual relationship. If she allows past sexual abuse or faulty thinking to undercut or even annihilate sexual activity in her marriage, she’s perpetuating her brokenness, not confronting it. In such instances, she will want to talk to an experienced, professional counselor who has dealt with this issue—few women can just “get over this,” any more than they could give themselves a kidney transplant.

When the marital sexual relationship reveals an ongoing weakness that a change of mind simply cannot heal—whether it be desires for unhealthy activities or aversion toward healthy activities—it’s time to seek help. Healthy sexuality is worth fighting for.

We’ll list the other three marks of healthy marital sexuality in the next post, as well as some helpful resources for those struggling in this area.