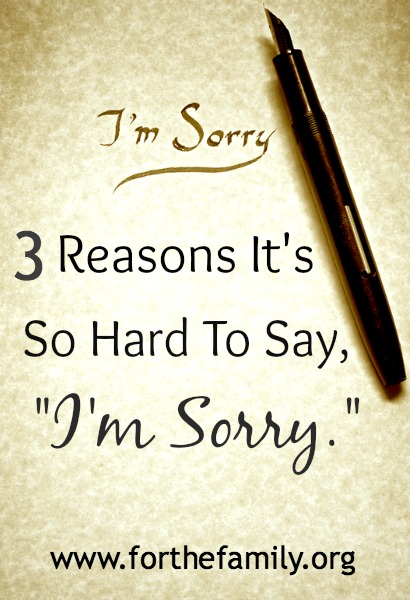 I could barely hear my wife’s voice on the phone. I had called her when I left the office to let her know I would be stopping by the house in a few minutes.

My curious (and concerned) ears heard enough to know there was trouble on the home front. As it turns out, our five-year-old daughter had snatched our oldest son’s lemonade out of the fridge – without permission.

What followed was a whole lot of relational mess that was going to take time to sort out and mop up.  A simple, “I’m sorry” would have saved everyone a lot of time and energy!

Kids aren’t the only ones who struggle to keep the peace. Most adults I know, including myself, are less than stellar at saying the simple words: “I’m sorry.” Sounds easy, doesn’t it? The truth is, it is unlikely you hear those words very often from family, friends, or co-workers. For many, we would far rather defend our sin than deal with our sin.

The following are at least three reasons why we struggle, when conflict arises, to say, “I’m sorry.”

1. It’s easier to blame. The sin of blaming is as old as the Garden (Genesis 3). When God asked Adam, “Where are you?” after that first dreadful fall, he wasn’t looking for his location as much as He was looking for his ownership. But instead, Adam blamed Eve, and Eve blamed the serpent. Blaming will prevent us from owning our sin in a conflict. The blamer looks around first, and looks in, last.

2. We fear failure.  Why do we hate to fail? Part of our fear is because it forces us to admit we aren’t perfect. We foolishly link our worth with being wrong (or being right). So instead of embracing our acceptance in Christ, we work hard to maintain our approval – from others. We fear admitting we are in error for fear that others may think less of us. Are you argumentative or defensive? Chances are you are not only trying to win an argument, but you are also trying to win approval.

3. We are prone to minimize our sin.  The minimizer doesn’t always see the seriousness of sin. What they have done is “no big deal” or “ordinary.” “You are over-reacting,” they might say. As a result, people who minimize sin don’t see the accumulating damage of their actions or attitude.  They generally have the ability to spot someone else’s sin but remain blind to the seriousness of their own.

The gospel enables us to walk humbly, because in Jesus we have nothing to hide. All of our sin has been dealt with on the cross. There is no need to pretend, perform, or excuse our sin. The grace of God leads us out of our sin (Titus 2:11-15). While saying you are sorry doesn’t solve everything, it is often the first step toward maintaining, or making, peace.

So the next time you find yourself in the middle of a messy relational squabble, try saying you are sorry.

Often, it really is that simple.