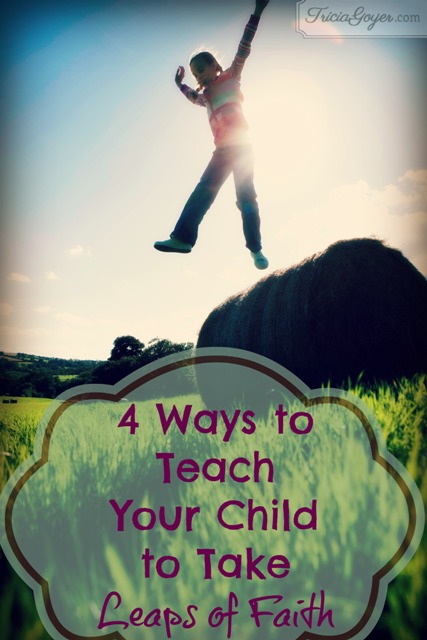 Leslie’s plan was to live in the Czech Republic for a year and work with the local church. She needed approximately $19,000, a nice chunk of change to raise. Most startling was her approach. “Mom, I really feel that God is telling me not to do any fundraisers. He’s telling me that He wants to provide.”

My ideas of support letters, spaghetti dinners, and bake sales were dashed.

She just needs a dose of reality, I thought.

Then I felt my Father’s still, small voice. Isn’t this what you taught her to do . . . to take leaps of faith?

God’s voice stilled my frantic musings. Well, I suppose I had. And here is how you can teach your child to do the same. {But be warned: Faith takes just that—FAITH.}

4 Ways to Teach Your Child to Take Leaps of Faith

Now, back to that fundraising, I’m happy to say that EVERY penny my daughter needed came in, without support letters, without spaghetti dinners, and without twenty-five-cent cookies. Customers at her work would slip her checks, and an international friend sent her a large sum. Money came in in unexpected ways from unexpected places . . . which means it just grew my daughter’s faith for the future callings God puts on her life!