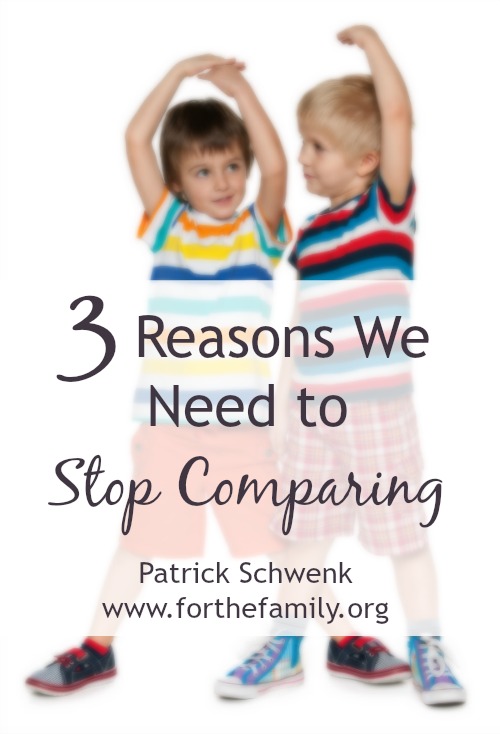 I discovered comparison when I was in third grade.

As we grow up, or at least grow older, the lists look different, but the comparisons continue. For the most part, they continue in close quarters. Comparison almost always happens with those we are most similar to.

And so pastors consider their church against another pastor’s church. Musicians listen to, and look at, other musicians. Athletes compare themselves, not against electricians or lawyers, but against other athletes. Follow that progression and you realize that yes, even parents, are no exception to this dangerous game.

We live in an increasingly competitive culture, so comparisons come easy, if not encouraged.  Our sin tempts us to take our eyes off of our own children, and instead, compare them to the progress or performance of someone else’s child.

So why is it so important to stop comparing?

Let me offer just a few reasons that are hopefully helpful to you (or us, as we can all struggle in this area):

1. It reveals either fear and/or pride

Peel back the mask, and what you will often find is that the true face of comparison is either a heart of fear or a heart of pride. Maybe even both. Sometimes we peek into the lives of others to see how we are measuring up. We look at the test scores, athletic accomplishments, or even the spiritual lives of another to see if we (or our children) are “enough.”

Instead of looking to Jesus, our sin tempts us to look at others, leaving us to feel less than or better than.

For some, comparisons driven by fear, can lead parents to be overbooked with activities, controlling, discouraged, or unnecessarily demanding. After all, who wants their kids to be behind? For others, comparisons driven by pride leads parents to feeling superior, or that their way is not just the right way to do things, it is the only way to do it. Pride isn’t satisfied with just wanting better for our kids; it is motivated by wanting our kids to be better than someone else’s kids.

2. It diminishes your child’s uniqueness –

Comparison is a thief. It robs a parent of joy and a child of his or her uniqueness. God has entrusted us with children who have been uniquely created and gifted in His image. Their strengths, personalities, and passions are from God. When we parent our children by comparison, we are trying to squeeze them into someone else’s mold. Uniqueness isn’t just about who they will become, but at what pace they will become that man or woman some day.

It takes wisdom as a parent to know when to push and when to be patient.

No child’s timing is the same. So be careful of remaking them not just into your image, but the image of someone else. Fan the flame of their gifts, personalities, intellect, and abilities. Your son or daughter is “fearfully and wonderfully made.” Encourage them at a pace that is consistent with who they are, and not someone else.

3. It misses the real target

Finally, comparison can be dangerous if we are aiming at the wrong target. What do you really want for your child? What does the best future look like for them? Life is not a race and the world is not our judge. God is our Father, who in Christ keeps a different kind of score. He evaluates and measures not always according to who is first, who knows best, the school they attend, the grades they earn, or the job they land.

Be careful that the measure of your child is not against the world, but against God’s Word.

For Jesus delights in service, humility, sacrificial love, meekness, and the hunger for what is right. Compare yourself against the One who will last, and whose Word endures. Parent in the direction of eternity and encourage with the stuff that last. It is not what the world is chasing that we are after, but it’s the will of God.

So be careful of comparing – it might be saying more about your heart than you realize.

Don’t let the race marked out for someone else diminish the uniqueness of your own son or daughter. In all things, look to Jesus, who rightly defines what matters most!

« Where May We Lay Our Young?
Are you Hosting or Impressing? »