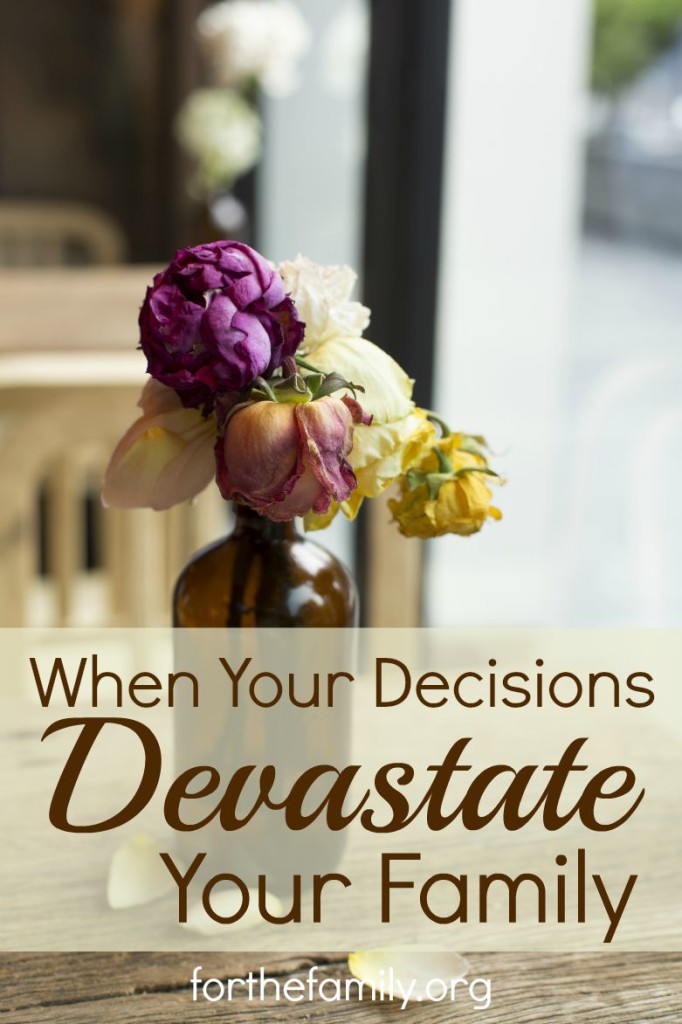 Today I wept as I read how the decisions of one man devastated his entire family. You see this man — an Israelite soldier — blatantly violated God’s very clear instructions, and the consequences of his actions were shatteringly traumatic.

I’ve read this historical account before, but today, I slowed down to linger for some perspective.

The man’s actions drew God’s favor away from his fellow servicemen, and thirty-six of them — thirty-six! — were needlessly killed in a battle they should have won. Worse, his family — his entire family!! (including his sons and daughters!) — received the severest of punishments: execution by stoning.

Why? Because in spite of the fact that God said NOT to take ANY plunder from the battle, Achan (pronounced ey-kan) did it anyway. He “saw a beautiful robe from Babylon, 200 silver coins, and a bar of gold weighing more than a pound.” And by his own admission he said, “I wanted them so much that I took them” (Joshua 7:21-22).

I stopped to imagine what one might have seen and heard as this story unfolded. Was Achan distraught with anguish, buckling at his knees, hit with the understanding that his actions brought premature death to his comrades? Were their widows wailing at the thought of raising fatherless children? Did they find Achan in his tent and pound their fists on his chest in disgust?

And later, as all of the Israelites took Achan and the robe, the bar of gold, the silver, his sons and daughters, his cattle, donkeys, sheep, goats, tent and EVERYTHING he had to the Valley of Achor, was Achan trembling with fear? Did he know what was coming? Were his little girls crying as their friends looked on? Were his sons old enough to put on a brave face? Were their friends tormented with pain when they had to pick up the first stone? Did Achan beg the people to take him, but to spare his family? Did he jump in front of his children in an attempt to shield them from the blows?

All of this for a pretty robe, a handful of coins, and a bar of gold.

It’s a harrowingly unbearable story about how sinful decisions can ultimately devastate an entire family. But it is no less haunting than stories of family devastation unfolding right here, right now.

Achan’s confession — “I wanted them so much that I took them” — might sound a little different in our modern situations:

I wanted that other man/that other woman so much that I broke my marriage vows.

I wanted that drink/that hit/that fix so much that I did whatever it took to get it.

I wanted a career and a carefree future so much that I aborted my baby.

I wanted a baby so much that I married the first guy who showed interest in me to get it.

I wanted that house/that car/that vacation/that education so much that I spent every waking moment working in order to get it.

I wanted to be married so much that I shacked up with my girlfriend/boyfriend thinking that surely she’d/he’d pop the question… sometime.

Sadly, the list could go on and on and on. Perhaps some of you, like me, have made such decisions in the past and your families have reaped/are reaping/or will reap horrible consequences.

Whatever your circumstance, will you take just a moment to rejoice with me that we no longer live in Achan’s time where God rightly unleashed His anger upon His incredibly rebellious people?

Instead, we live in a time where Jesus has come and lived and died on the cross to bear the brunt of God’s righteous wrath — a righteous wrath that should be rightly unleashed upon US.

AND THEN JESUS ROSE AGAIN!

So if you find yourself in a position where you long more than anything else to take back your narrative? Well Hallelujah that Jesus is here and with us NOW, and praise God that He is very much in the business of redeeming the story that has unfolded in our families even in the wake of our most deviant decisions.

And this? “…If we confess our sins to him, he is faithful and just to forgive us our sins and to cleanse us from all wickedness” (1 John 1:9).

Bottom line? There is NO devastating decision that you could ever make that is beyond the healing power of Jesus Christ.  Go to Him now.  Don’t delay!

Praying for your family and mine,

« Teaching Children God’s Word
Some Tips for Back to School! »