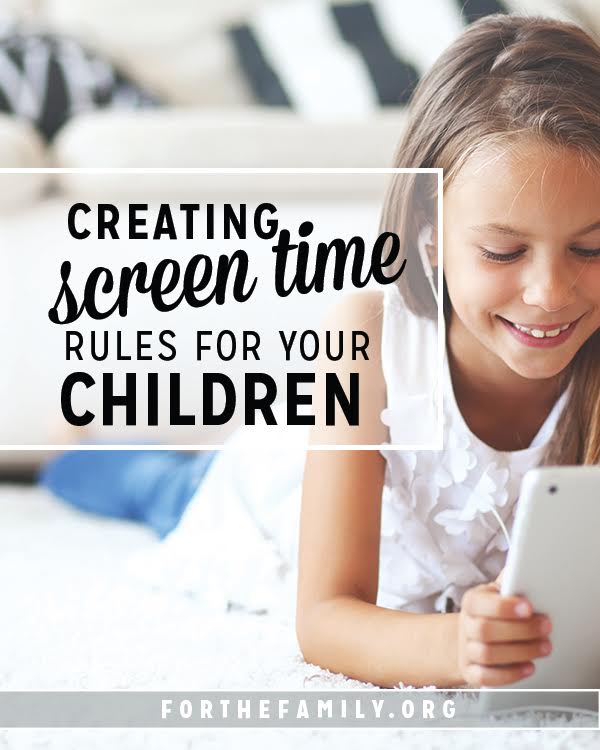 In the corner of our garage sits a vintage tabletop Ms. Pacman video game, a relic of my husband’s childhood. Much has changed in technology since that time. Instead of Atari, we have Xbox and wiiu. Rather than just a desktop computer, most of us also have laptops and handheld devices. Long gone are rotary phones—remember those? Instead, we have smart phones that contain our bank, encyclopedia, security system, library, stereo, social networks, and calendar all wrapped up small enough to fit in our back pocket. Indeed, since the days of Pacman, technology has changed, so much so that it often seems our life is ruled by and shaped by it.

Our children are growing up in a world where everything revolves around a screen. Children today spend at least seven hours a day staring at some kind of screen, be it a television, computer, or handheld device. While much of technology is helpful, useful, and important, there is also much that is concerning. Studies have found that overuse of technology can cause attention difficulties, obesity, irritability and behavior problems, learning challenges, and even addiction.

As parents, we should always be watchful, discerning, and informed about what our children watch, play, and participate in. Sometimes even things that are good can turn out to be bad because of the sin found in every human heart. Through technology, children are exposed to pornography at a younger age than ever before. Pedophiles use technology to seek out prey. Temptations abound at every click and scroll.

As parents, we need to set rules and limits to our child’s use of screens, computers, phones, and devices. Such rules and limits will depend on our child’s age, maturity, and the purpose for which they use such devices. This article cannot cover all concerns parents might have, but here are a few guidelines to consider.

1. Set a time limit: Children need boundaries and parameters. When it comes to screen use, they need a time limit. Currently, The American Academy of Pediatrics recommends that children under the age of two have no screen time and that older children have no more than two hours a day of any kind of screen time, including watching television. For more information on current recommendations, visit the AAP website.

2. Know what games and apps your children are using: Always investigate each game and app your child wants to use before they use it. All games have recommended age limits. For older children, investigate and learn all you can about the latest social media apps your child wants to have. No matter their age, parents need to be a part of the decision making process about the games and apps a child uses. Explore with your child why they want the game or app. Is it something that will glorify God? How might it be a stumbling block or a temptation to for sin?

5. Consider taking a break: It’s good to take breaks from things and screen time is no exception. In our home, we have a fasting day from playing games on computers or devices once a week. Taking a break encourages children to interact with and play with real people.

6. Use child protection software: There are many products out there for your computer, television, and other devices to filter out inappropriate and unwanted things.

7. Include rules for what is expected of them at someone else’s house: Screen time rules and boundaries should be established for when your child is visiting someone else’s house as well. Other families may not have the same rules as you do and may allow their children to watch anything they want on television or play any game online they desire. Set limits with your children on what they can and cannot do while at a friend’s house.

8. Create an agreement that everyone signs: Once you have established your screen time rules, write them out and discuss them together as a family. Make certain your children understand what is expected of them and have everyone sign an agreement. Keep the agreement available to refer back to when needed. Update and make changes as your child grows and matures.

Technology is with us to stay but we don’t have to let it rule us or our children. Do you have screen time rules for your family?